We had a blast last weekend at Bass Player Live in Los Angeles. SIR on Sunset Boulevard became the Hall Of Fame of bass players for a couple of days. If you’d ever want to give yourself the opportunity to meet many of your bass hero’s upfront, being able to hang out and chat and see some great clinics and appearances – Bass Player Live is the place to go!

It was a great honor for EBS to see one of our artists to receive the “Young Gun Award” for the second year in a row! Last year Tal Wilkenfeld was honored the award, and this year it was given to Henrik Linder from Dirty Loops! By coincidence (?) this was also the second year in a row that we had the winner of the Young Gun Award on the cover of our own Magazine (released in January)!

The Award was presented on Saturday night when Henrik performed an hour’s set together with ¾ of the original Tribal Tech – including one of Henrik’s biggest bass heroes, Gary Willis. That very same room that the concert happened in was the same room Dirty Loops signed their record deal with Verve a couple years ago, which underscored the event’s epic and historic proportions and the rare opportunity to witness something really special for the audience that where present.

Artists at the Show

EBS Gear at the Show 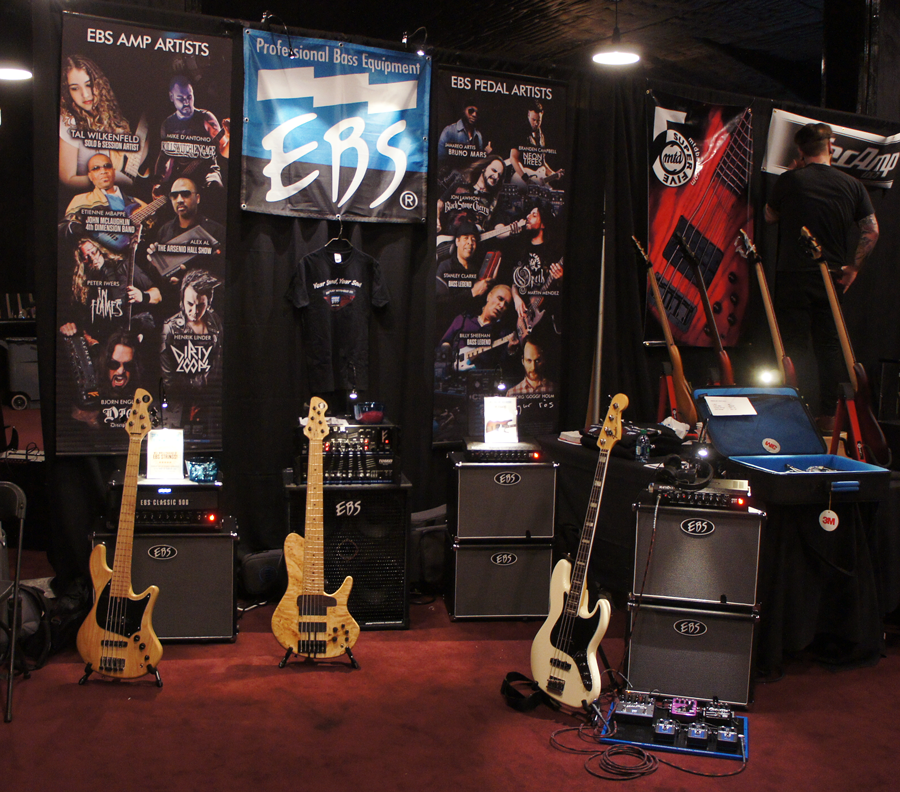 We choose to include a nice selection of gear for Bass Player Live this year, with the monstrous Fafner II amplifier as the cream of the crop, with the nice and warm sounding EBS CL500 amp with the latest addition to our ClassicLine, the CL-210 cabinet, as well as the lightweight mean little dwarf (as the legend says) Reidmar amps. Along with that, a demo board of our latest and best selling pedals, including the latest additions EBS FuzzMo, ValveDrive DI and Billy Sheehan Signature Drive, along with the MultiComp, OctaBass and UniChorus, as well as the Micro Bass Preamp. We also showcased the great flat designed patch cables and EBS strings – a well kept secret on the US market, available in Stainless Steel or Titanium Nickel both in several different gauges ranging from 4 to 6-string sets.

Most attention was drawn to the Fafner II, the cleverly designed flat patch cables, and a lot of interest around the cool sounds that could be made using the Billy Sheehan Drive along with other effects in the separated loops for the drive sound and clean sound. We put the OctaBass in the clean loop and an UniChorus in the drive loop that all together sounds a bit like a keyboard bass – and of course Henrik’s basses from Swedish luthier Anders Mattisson, who also assisted us at the booth.

Here are the winners of EBS Strings (you will each be contacted by Email to get your strings):
Alan Reese, Jason Leopold, Romeo Jacinto, Wes Rataushk, Luis Villegas.

Check out the images from the show below and we hope to see you all at the coming up NAMM  Show in January, where you will find EBS, and our full line of equipment at booth 5391.

We would like to thank Jeff, Joe and Chris at Bass Player, our trusted friends at Centerstaging, Lon Cohen Studio Rental and SIR Los Angeles, Mikael Gustavsson, Anders Mattisson of Mattisson basses for helping us out at the show, and all the great artists, friends and visitors for making Bass Player Live 2014 such a great event!

This story was brought to you by www.ebssweden.com