Born in 1973, Sean Hurley is in the middle of a successful career as a first-call session bass player in Los Angeles, and member of John Mayer’s band since 2008. We had the chance to meet Sean in Stockholm at the gig with John Mayer earlier in 2014, a very inspirational meeting (and great concert) that developed into this interview.

NOTE: This is an edited version of the interview, it will be published in full in the EBS MAGAZINE 2015, to be released at MUSIKMESSE in Frankfurt 2015.

You seem to have done your homework to trace the roots’ of vintage bass equipment and classic tone?

I’ve had many stops along the way on my quest for the right gear. I didn’t quite find my true voice on the instrument until 1999, when I recorded and toured with Vertical Horizon. The classic vintage tone I was after was only possible with certain combinations of vintage or vintage inspired gear. It was frustrating to figure it out without the money to buy actual vintage gear.

As my quest continued, I realized the sound I craved and wanted to emulate stemmed from this classic equipment. I definitely did my homework regarding what gear my idols used and realized I needed to have that same gear in order to get the tone I wanted. It’s funny how simple that equation is. Classic gear = Classic tone.

You have a signature Fender Custom Shop bass that certainly has a great vintage vibe to it. Tell us about it?

My signature Fender Custom Shop Bass is a copy of my main Mayer bass, my 1961 Fender P. Mike Eldred, who headed up the Custom Shop at the time, asked me to bring my bass to the shop in December 2012. They measured everything and got to work on recreating it. Mike suggested offering the bass in different colors, and I thought that was a fantastic idea. I love the idea of having different color choices to make someone else’s signature bass feel like your own. The feel and sound are copied from my original 61, but it doesn’t look like a carbon copy. I really like that.

The coolest thing the Custom Shop did was address the foam muting. On my original, I place an ugly piece of foam under the strings by the bridge to shorten the decay of the note. It also changes the tone in a very cool way. I wasn’t sure how Paul Waller (the builder of the bass) would handle it. He came to me with two options: the first option was to tape a clean piece of foam under the strings. The second option was to use a Jaguar guitar mute system, which happened to fit perfectly on the bass. Needless to say, I absolutely love option two. I can flip it on or off as needed.

At the show in Stockholm, you had some basses set up with flatwound strings, and some with roundwound strings. You also mentioned you give the flatwounds a special treat before you put them on, could you explain what you do and why?

I love the sound of flatwounds once they are broken in, but that can take way too long to do. It requires hours of play. They have a brightness right out of the package that I don’t like, so I experimented one day by applying Vaseline to grease them up and deaden them. It worked! I do that with every set of flats I use, and they sound like they’ve been on for years! And then of course I never change them.

You had a big bass rig on stage, but that’s not providing the main sound that the audience hear, right?

That’s true. For this tour, I brought a vintage B15 in an isolated cabinet to provide the front of the house and in-ear amp sound. There was also a DI to blend in. I had big rig for my stage sound, but it wasn’t miked. It was just to shake my booty up there.

The FOH engineer (Chad Franscoviak) told me he couldn’t use a mike on the rig because it was set up so close to the drums that it gets too much drum bleed. So having the B15 was a beautiful thing. It’s my studio sound, on the road.

You use the EBS ValveDrive with the B-15. What settings does it have, and how is it connected with the B-15? What does it bring to the mix?

I use the EBS ValveDrive to give my B15 a little more grit or character. I do the same thing in the studio. I rarely ever use the B15 without the ValveDrive in front of it. It just opens it up and gives it more harmonic interest. It’s pretty subtle, but I would really miss it if I didn’t have it.

I generally set it: Vol 9 o’clock Treb 3 o’clock Mid all the way up Bass 7 o’clock and Gain at 9 o’clock, on the modern (red light) setting. Like this: 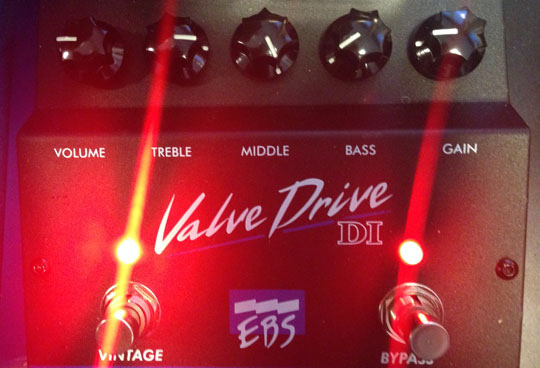 In the studio, I often use it to really dirty up the amp. In which case I use this setting: (Vintage or yellow light) Vol 9 o’clock Treb 4 o’clock Mid all the way up Bass 7 o’clock and Gain at 10-11 o’clock: 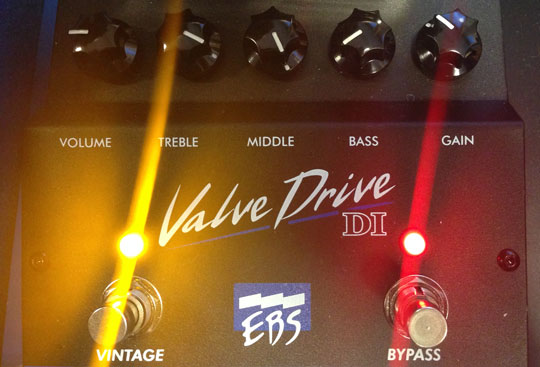 We could spot some more EBS pedals on your pedal board. The MultiComp and the BassIQ for instance. Do you have a standard pedal setup that follows you on all gigs, or how do you approach using effects in various contexts?

I have separate pedal boards for live and studio work. My pedal board for the Mayer tour is dialed in specifically for his music, which doesn’t really require any effects. It has the Multi-Comp, which is a great compressor pedal. I use it to beef up the tone just a bit. It also has the ValveDrive, which only affects the B15. I use the Bass IQ, set to my super subby setting (Thres: off; Attack: all the way up: Toggle: Up), which is sent to a second DI to be blended in by Front of House and the in-ears.

My studio pedal board has more going on and is expandable to accommodate more extreme tonal changes. I have the EBS ValveDrive and three other drive or distortion effects to dial in the exact amount of dirt I need. This can vary from subtle to extreme, depending on the session. I also bring a Pelican case full of other effects to loop into the studio pedal board if I need to get a little freaky.

My first choice is to grab the right bass, and then I look to the right pedals to get the sound for the song. That applies to both live and studio gigs.

Speaking of the BassIQ envelope filter, you use it in a very unconventional way. Could you describe that?

I use the BassIQ as a sub bass sound, not as a funky sounding envelope filter effect. I can’t remember exactly when I tweaked the knobs of the pedal and discovered this massive sub thing, but it must have been around 10 years ago. I had an “aha!” moment and decided to use it like that in the studio when a pop producer wants a bass guitar to replace a synth. I set it to never open the filter. It just heaves the lowest thump and has no top end. It’s so huge and subby. On the new models, I open up the pedal and adjust the high frequency all the way off to get the sound I’m after.

In the past I tried an octave pedal but that forces me to play an octave above, which is limiting. This way I use the BassIQ on a separate DI to blend in as much sub as the song can handle. Producers love it.

How does your studio setup differ from the live rig?

My studio setup is completely different. I have a studio pedal board that was built to split my signal on the board. It has an input for my bass and two outputs. One is a clean signal that goes into my Evil Twin bass DI and the second passes through the pedals, which are only looped in as needed, depending on the song I’m tracking. It also has an additional loop so I can add in pedals as needed.

I only put on my most used pedals so that I wouldn’t have to lug around a board containing every pedal I own. That said, I use just the EBS ValveDrive about 90% of the time and nothing else! In the studio, I switch basses more frequently than I alter my sound with pedals. But it all depends on the music I’m asked to play.

What are your best advices to bass players that are aspiring to land a major gig or establish themselves as session musicians?

My advice to aspiring bass players looking to land a major gig or become session musicians is to play as much as you can and say yes to every gig that comes your way. I got some great live gigs and some great sessions after meeting someone on a not so great gig. Because I was willing to do it, it led to an even better opportunity. You have to be a part of the musical community and be willing to move to LA, New York, or Nashville if you really want to give it a go.

Finally, if you had to pick one EBS product – which one would it be, and why?

If I had to pick just one EBS product, I would choose the ValveDrive. It is my go-to pedal to give me anything from a subtle vintage growl all the way to a heavy, dirty distortion. It’s my #1 pedal.

This story was brought to you by www.ebssweden.com

The complete and more detailed interview will be published in the EBS Magazine 2015, to be released at MusikMesse 2015.