Swedish legendary rockers Backyard Babies are back! Their gig at the Sweden Rock Festival recently was their first in 5 years, and followed by a busy festival tour schedule throughout the summer. Sweden Rock was also the first for bass player Johan Blomquist as new EBS Artist! 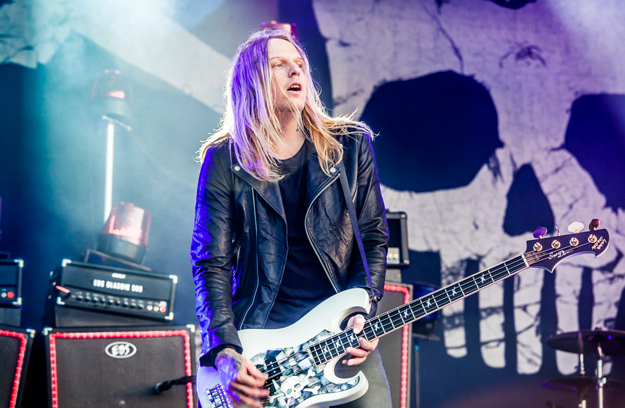 Johan, welcome on board with EBS! A few gigs into the comeback tour – what’s your impression playing through the EBS rig so far?

Thanks! It’s been great, I’m more than excited about the sound EBS give me.

I know when the intro goes on that I can trust on my rig, and that helps me to do better shows, so thanks again for bringing me aboard!

You went all-in and using EBS amps and cabinets, as well as pedals – and strings! How does your setup look like?

Yes, that’s right. I have 2x 810 ClassicLine cabinets and 2x EBS Classic 500 amps, mix the sound with my pedal board featuring an EBS Micro Bass II, a Valve Drive DI and a Multi Comp.

And there is more…since you got the EBS CarryOn pedalboard bag, both Nicke (singer/guitarist) and Peder (drummer) wanted one too, ha ha?

Ha ha, that’s right! Maybe they wish they were bass players’ as well.

The whole band’s setup looks really cool with all these amps in different angles, who came up with that idea?

That was Dregen’s idea, our guitar player. It turned out great on stage.

My bass tech just made me 2 custom basses that I play on right now, I came up with the idea in November last year and just got them in time for the tour.

I have a few old Fenders’ too. I started to play Fender Precision basses because Dee Dee Ramones used to play them and I’ve been using them and love them ever since.

The band just came out with a new great song – Th1rt3en or Nothing (that you can check out below), and there’s a whole new album recorded. What should we expect from the new release?

It´s nothing new really, just a bunch of great songs. It’s Rock’n Roll all the way through!

The album will be released at the end of the summer, right? Will there be a headlining tour to support the release in the fall?

Yes, we will do a European tour in November and a Scandinavian tour next year.

Check out the video for the new single Th1rt3en or Nothing, partly recorded at the Sweden Rock Festival earlier this summer: