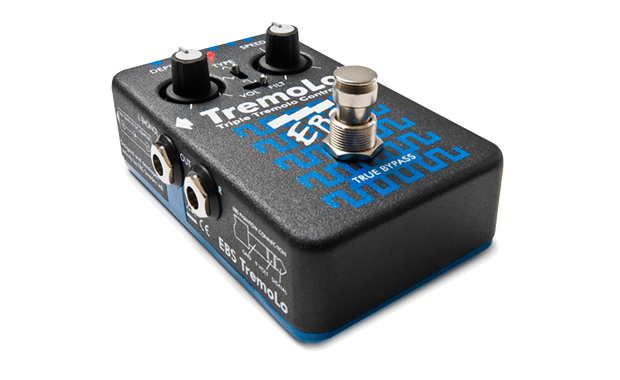 THE EBS TREMOLO IS A STEREO VINTAGE TYPE TREMOLO OR SWEEPING FILTER EFFECT FOR GUITAR, BASS AND KEYBOARD.

Nothing compares to a true analog effect when it comes to Tremolo pedals. The EBS TremoLo offer full bodied fat sound, in a tiny but sturdy little box that fits nicely on any pedal board, delivering all that great tremolo effects you've always aimed for. Perhaps most known as a guitar effect, the tremolo can add nice character to bass as well (just listen to the samples by Porcupine Tree bass innovator Colin Edwin below!)

Use the controls to set the Depth and Speed of the effect. The sweep character can be set to choice of three different waveforms; sine, square and sawtoothwaveforms and offers volume or filter type of effect.

Ola Englund play through the EBS TremoLo with guitar!

By Ulf Widlund (Translation from Swedish)

Tremolo pedals for bass are few and far apart. A fact that EBS tries to change with the TremoLo, which is flexible enough to suite other instruments as well.

As with the other EBS Black Label effects, the TremoLo has a sturdy metal chassis with recessed controls and miniature switches. The bottom is covered in thick foam rubber, which in addition to the weight keeps the pedal from slipping and sliding. It can be powered in three ways: with battery, with an eliminator or from an EBS phantom feed.

The pedal takes both mono and stereo signals. A mono signal in can be put out in mono or stereo, while a stereo signal comes out as true stereo, i.e. it is not mixed together but kept as two separate signals all the way to output. The footswitch is a true bypass, i.e. the signal completely passes by the electronics.

Like most tremolo pedals it has Depth and Speed controls. What´s unusual is that it offers three waveforms – sinus, saw tooth and square – which can be chosen from a small switch. Another unusual feature is that it can be set to modulate the volume (which is the most common as tremolos go) or through a filter. The filter is a low-pass filter set at 200 Hz, to not affect the lowest frequencies, and with a sweep between 200 Hz and 10 kHz.

A red diode shows the tremolo speed when the effect is activated.

If you wish to use the TremoLo in a traditional way, just set it to sinus wave and volume modulation, and adjust the Depth and Speed controls – as simple as that! Being a bassist, I feel that the filter position is more useful since it makes the effect more subtle, and I prefer it in stereo.

I am happy to discover that the tremolo effect works much better than I expected on bass. It is at its best in jazz/funk grooves and lyrical melodies and it works well in connection with fretless playing. With the right amount of tweaking, one can get a sound that is close to chorus, although more defined and less shimmery. The saw tooth and square wave shapes are a bit too drastic for my taste, possibly with the exception of the filter position. They may be amusing for getting extreme sounds such as ping-pong effects (volume and square wave) or nervously shaky sounds (filter, sinus wave, full speed). The true bypass function is an asset. Pedals that steal power from the signal when not in use have always annoyed me.

The EBS TremoLo sounds good and can be used in many more ways than I had imagined. The design and the components are top notch, as always with EBS. Like the other EBS pedals, it matches the balance between user-friendliness and flexibility. Mono and stereo in-and outputs, three different wave shapes and modulation of volume or filter are really more than one could ask for from a tremolo pedal. Being a bass player I am also delighted by the low-pass filter that allows me to keep the lows unaffected when the effect is activated, and the true bypass function that does not affect the signal when the effect is shut off.

To those of you who have not tried tremolo effects on bass: now´s the time. It sounds better than you can imagine, and it´s really fun! 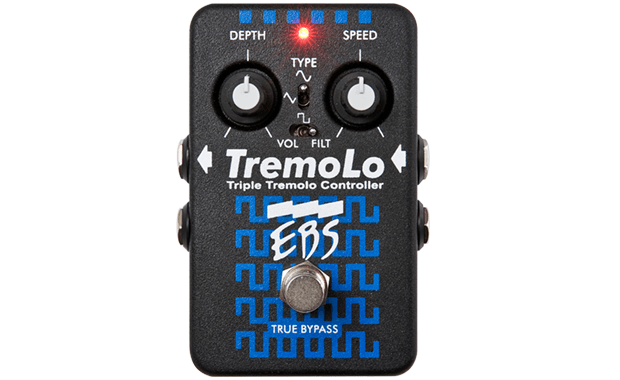 Suitable for live and studio use

Controls for Depth and Speed