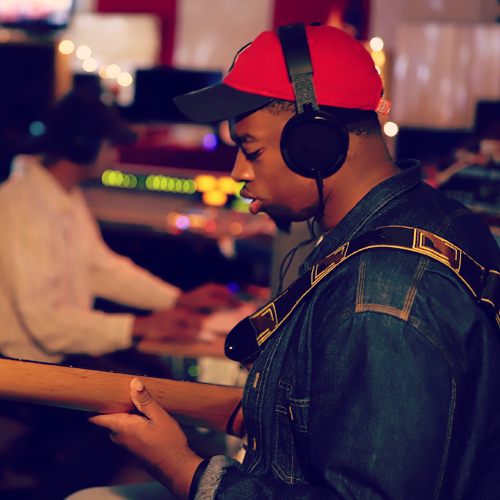 He was born in the U.S, but his family's musical background comes from a rhythmic groove from Haiti. Samuel grew up playing drums, assisting his mother's soloing in the church at the early age of 4. Later he fell in love with fusion listening to Pat Metheny, Chick Corea, and Herbie Hancock.

Over the years in high school he picked up Bass Guitar where he would have opportunities to open for Grammy and Stellar/Dove Nominated and awarded Gospel artists, play in Festivals like the well known Newport Festival multiple times, and be awarded several “Zildjian” awards and scholarships for academic achievement as a student and drummer at Berklee.

Samuel believes that music is a powerful tool that is very useful not only for those that are healthy and fully functioning but even for those in hospitals and nursing homes. Samuel was born with hemifacial microsomia. He was born with one ear, and although the doctors thought he would never be able to hear, music still somehow made its way back to him. It's these experiences in his life that have led him to study Music Therapy.

Other than Therapy, he has had the opportunity to study and play under and open up for great influences like “Lalah Hathaway”, George Clinton and PFunk, Jekalyn Carr, Tasha Cobbs, Jabari Johnson, Doobie Powell, Kevin Powell and legends like Victor Wooten.

Samuel studied at Berklee College of Music where he majored in Professional Music with 3 concentrations in; Music Therapy, Music Education, and Recording and Production. His musical influences include drummers like Dennis Chambers, Chris Coleman, bass players like Andrew Gouche, and John Patitucci, and professors like Jon Aldrich, Winston Maccow, and Walter Beasley. Samuel is a well-rounded professional musician and human-being that wants to share his life and music through the music he plays.

Connect with Samuel on...