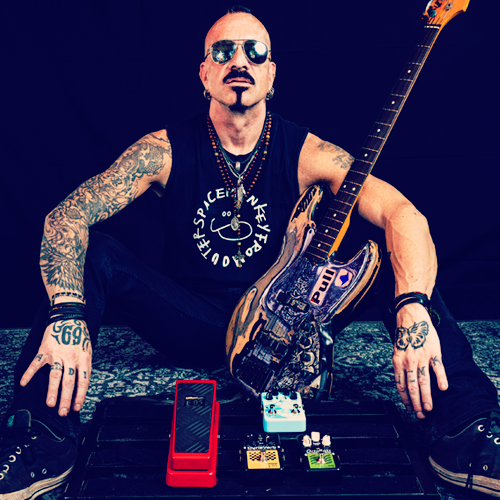 Johnny Griparic is no stranger to the art of backing up legendary artists he has righteously acquired the title of “de-lux” sideman by providing his straight forward no nonsense rock solid thunderous grooves for the who’s who in the music business.  He moved to Los Angeles from Sweden in 1990, and immediately found a home in all the Hollywood hot spots known for live music and jams. First by joining local Blues Great BB Chung King’s ensemble and as a member of the legendary Screaming Cocktail Hour band that ran the most beloved and sought after jam night of the 90’s at the world-famous Baked Potato Jazz club. That’s when his friendship with Guns & Roses guitarist Slash began which led to work with Slash’s Blues Ball and a spot in the guitarist’s solo project Snakepit, with whom he recorded and toured with extensively for a few years followed by a stint with punk icon Nina Hagen.

In the early 2000’s Johnny was providing the bottom end for another Hollywood royalty act : The Starfuckers A band That included Guns & Roses : Gilby Clarke , Stray Cats drummer Slim Jim Phantom, and from LA Guns Tracii Guns. This led him to work with such diverse artists as Carole King, Richie Sambora Kiss’ Ace Frehley and The Eagles’ Don Felder before eventually joining guitar virtuoso Richie Kotzen’s Band where he spent the next few years touring the world and recording several albums including the the critically acclaimed “ Live In São Paulo”.
Johnny is currently holding it down for Blues guitar legend Walter Trout.